The fourth weekend continued  the rough pattern developed over the previous three in 2017. Strong performances, from the “Yo Yo’s” with the “New Brooms” chipping in again.

Wayne Jones, Andy Smith and Alex Roy for the Yo Yo’s. Jaques, Aspinall and Josh Richardson doing damage in bursts for the new brooms. The leaderboard remains relatively stable but the bunching up behind “The Wanderer” is getting closer. 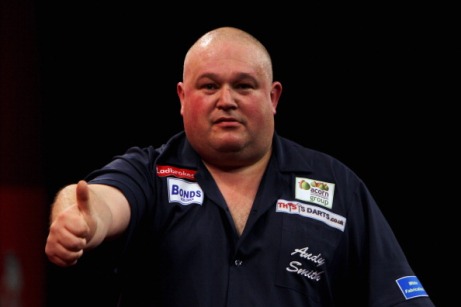 As predicted, Andy Smith’s slow start burst into life this weekend. The Pieman has the skill and persona to thrive on this tour and is beginning to do so. Steady results on Saturday were followed by a strong run to Sunday’s final. Andy’s draw on Sunday was pretty tough and this seemed to pull the best out of him. He has now crashed into the top 16 on the Order of Merit and is likely to rise again during the later stages of the season.

Black Country pairing of Nick Fullwell and Ian Jones should be familiar to anyone who plays open events around the midlands. Travelling partners, and friends, the two have been a regular, and winning, fixture for many years. The arrival of Jones on the PDC tour was always likely to result in Fullwell benefiting. This Sunday featured a Semi Final for each of them and you can rest assured it will not be the last. Almost no one associated with darts would begrudge Nick the extra support , and motivation, which Ian can provide. As for “Whippet” now that he has begun to acclimatise, to regular PDC events, his legendary will to win and battling qualities will become familiar to many more.

Radaslaw Szaganski and Robert Rickwood have added two more names to the rush of players proving that past performance is not always a current guide. Neither of these two players had performed outstandingly on the Unicorn Challenge Tour previously, despite Rickwood having solid performances this year, yet Robert claimed a victory and Radaslaw a runner’s up spot in events 9 & 10 respectively. Evidence is beginning to build regarding the benefit of patience and exposure to PDC conditions and formats. A look at the Pro Tour Players Championship events of 2017 will confirm that this is applying at all levels.

A no-show from Lisa this weekend. This is probably a very sensible action. She must be able to keep her options open for as long as possible. Although she has shown herself to be competitive, on the tour, the other opportunities available to her mean that she has a chance to build her career in any code or gender balanced events. Should she choose to take part in the remaining events or simply play pick and mix for a while she is able to gain income, experience and confidence from the breadth available to her.

Three standout moments from the next younger players this weekend. Nathan Aspinall winning at this level marks another step in his development, due to his slightly unconventional style “The Asp” is underestimated by many. His match playing ability and talent level should gain him more opportunities at all levels in the coming years. The return to form, although too early to tell, of James Hubbard is welcome, he is a very nice young guy who has suffered severely in recent months. Finally Josh Richardson seems to be again making progress. His choices, in terms of event selection and attitude, seem good, together with his dad, and progress is being made.

A few years ago Paul Harvey looked on the verge of a breakthrough into the higher levels of the game. He reached the semi final of the British Open in 2010 and was playing at a very high level through at least the early part of 2011. It is great to see a return to something approaching this form in recent months. Should he reach, or surpass, those previous levels then keep a very close eye on him. 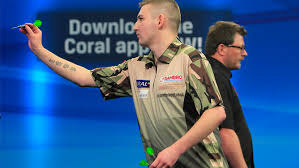 Jones and Dyer are still in the tour card positions but the pack behind is both expanding in numbers and condensing in terms of the differences between their totals. Wayne Jones is unlikely to slip out of the top two. The additional automatic tour card and the next eight places, earning a free Q School entry, are still available. Aspinall, Rickwood have shown that one victory makes a huge difference and others such as Andy Smith and Luke Humphries seem to be gathering momentum for the later part of the season.

All in all a very good advert for the Unicorn Challenge Tour and it’s likely to get even better in the coming weeks.