These Girls Did Part II

In the first half of this piece five female athletes were highlighted for their superb achievements and inspirational qualities. Here are five more to remind us that these girls can and did:

Another sportswoman who is now a Dame of the British Empire, MacArther however holds a special place if you happen to be British. Due to our sea-faring history, sailing is greatly admired by GB society and since I can remember those who hail from these islands and sail round the world, or set other ocean going records are given high regard.

Dame Ellen was given the DBE honour upon completion of her record-breaking round the world solo voyage in 2005. The mere fact that she was awarded the honour immediately, and not in a list of those who had achieved the outstanding, placed her on a historical par with Sir Francis’s Drake & Chichester a significant moment for women.

Ellen’s remarkable voyages in Kingfisher 1 & 2 and later vessels created huge public interest and her honest and sometimes painful video diaries provided genuine insight into the demands, both physical and emotional, of these ventures which the masses have held a romanticized view of for a centuries.

Following her retirement from professional / competitive sailing Ellen has again pushed boundaries, not for her the constant reliving of former glory, after dinner speaking etc. No she has set up a foundation to educate and persuade people of the need for a circular economy and to think and re think for the future. In addition her charity works, using sailing to help the terminally ill and recovering young people to regain confidence and enjoyment, is highly praised and successful. 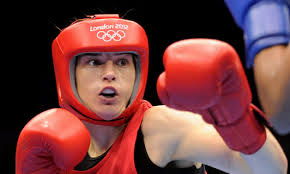 With possible exception of Usain Bolt Katie Taylor was the hottest favourite for a gold medal at the 2012 Olympic Games. The Irish pugilist is a stunningly skillful and talented boxer with speed, skills and no small amount of strength and courage to boot.

A number of sports have an equivalent of a grand slam, Katie certainly holds amateur boxing’s version. She is National, European, European Union, World and Olympic Champion. She has won 6 consecutive European titles, 5 World titles and has never won a lesser medal.Less well-known is that she has also represented her country at football!

It took until 2001 for the IBA acknowledge women boxers officially. Before that point Katie was simply listed as K Taylor and matched against guys in her age/weight class. It appears that such things did not slow Katie very much, she was already talking about representing Ireland in the Olympics in 2002. A decade later that dream came to fruition in the first women’s boxing events in Olympic history.

The sight and sounds of the Irish support given to Taylor at the 2012 Olympics were remarkable. Not long ago women’s boxing was scorned or even laughed at. On the night, Taylor claimed gold, no one added the phrase  ……..for a woman to any description of her skills or performances. The reaction to her win at home was phenomenal and as such will be the inspiration for thousands of Irish girls and women.

If at first you don’t succeed try, try again they say. Well this remarkable lady did just that. You would think that six world titles and a whole host of world cup wins would mark a great sporting career. However Grainger was a potential victim to Steve Cram syndrome, namely that you can be remembered for what you don’t win, the Olympics in Cram’s case, more than for what you do.

In what is still the minority sport of rowing to win all those titles earns a huge amount of respect from peers and officianados but the general public and athletes themselves know that the Olympic games are another level altogether.

Grainger had become a serial silver medallist, in 2000, 2004 and 2008 she had collected silver medal in two different events. Could a last effort, at a home Olympics, provide the inspiration to go one better? It certainly could. Together with Anna Watkins alchemy was achieved on Eaton Dorny when silver became gold.

If further inspiration is needed from one woman, it can be offered. During her sporting career Katherine also pursued an academic one. She received an honors degree in Law, A Master of Philosophy in Medical Law and also in 2012/3 completed and was awarded a PhD in Law from Kings College London, where she is now a fellow.

This unmatched Hungarian swimmer was only just 14 years old when she announced her arrival on the world sporting stage. Becoming 200m backstroke champion at the 1988 Seoul Olympics.

For the next few year she entered on a one woman crusade of swimming record and titles, in total she posses 5 Olympic gold and 2 World championships and 9 European titles. She has held  world records at both 100m and 200m and is one of only 3 swimmers to win the same event at 3 Olympics in a row. In the same event she holds the record of winning an event by the greatest margin with over 4 seconds separating her from the runner-up.

Egeszeki overcame adversity when her event was sullied by questionable performances from Chinese athletes in the mid 1990’s. The re-appearance of several East German coaches, and methods from another questionable era, posed serious question mark over the 1995 world championships amongst others. Not retiring and winning the Olympics of 1996 spoke volumes about Egeszeki’s attitude to her sport.

Eastern European states were not famed for a progressive attitude toward woman, yet Little Mouse or Mouse as she was known transcended that and is one of the nations favourite sports people and perhaps their greatest definition of a champion.

It remains almost incredible to think that Egeszeki retired shortly after that final Olympic triumph. The list of records , medal and achievements are even more remarkable when placed in their context. She did all this in a little over 8 years and retired at the age of 22!

A member of the Hungarian swimming board and the Hungarian IOC she has been giving back to the sport and country she loves ever since. 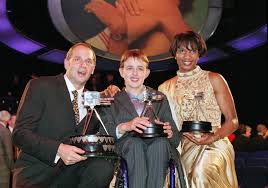 When it comes to inspiring people Tanni takes some beating! The third dame on the list she sits in the UK House of Lords as Baroness Grey-Thompson. This follows a stellar career as a paralympic sports woman. Specifically, one of the great wheelchair racers of all time. 11 Paralympic Gold  and a total of 16 medals over 5 games between 1988 and 2004 should give some idea of the remarkable achievements made by Tanni as she pushed wheelchair racing and para athletics forward. These achievements should also include the holding of over 30 world records and winning titles at events from 100m to the marathon. She won the London Marathon on 6 occasions.

As a woman racer who also had a family while competing and adapted to every life changing event, seeming to get better at every turn, yet more inspiration was provided. The sense of ground breaking never seems to stop, from being in the top 3 places at the BBC sports personality of the year awards through to coaching the next generation of Wheelchair racers including commonwealth games medallist Jade Jones.

Tanni’s post retirement career seems to be on a path to be as successful as her athletic one, she has been asked to take part in commissions and organisations on the future of sport in a wide variety of contexts.

Perhaps the most amazing thing, about The Baroness Grey-Thompson, is how the labels have fallen away. She does not appear to be thought of as disabled, woman or any combination of the two. She is simply Tanni Grey-Thompson the phenomenal athlete whose reputation and integrity are beyond doubt and who does not seem to stop achieving things!

There we have it, ten women who demonstrate that all is possible and what can be wanted can be achieved. Looking back through the list Two things seem to jump out.

Firstly, that these truly phenomenal women seem to adjust to life after pro sport remarkable well and seemingly better than their male counterparts? Secondly that although all are most definitely female, in every other way they differ. We have those who succeed young, those who continue over a huge career span, differing body shapes or physicality, differing physiques, sexuality and a wide span of personality types or styles. Surely more evidence , if any were needed, that girls can!